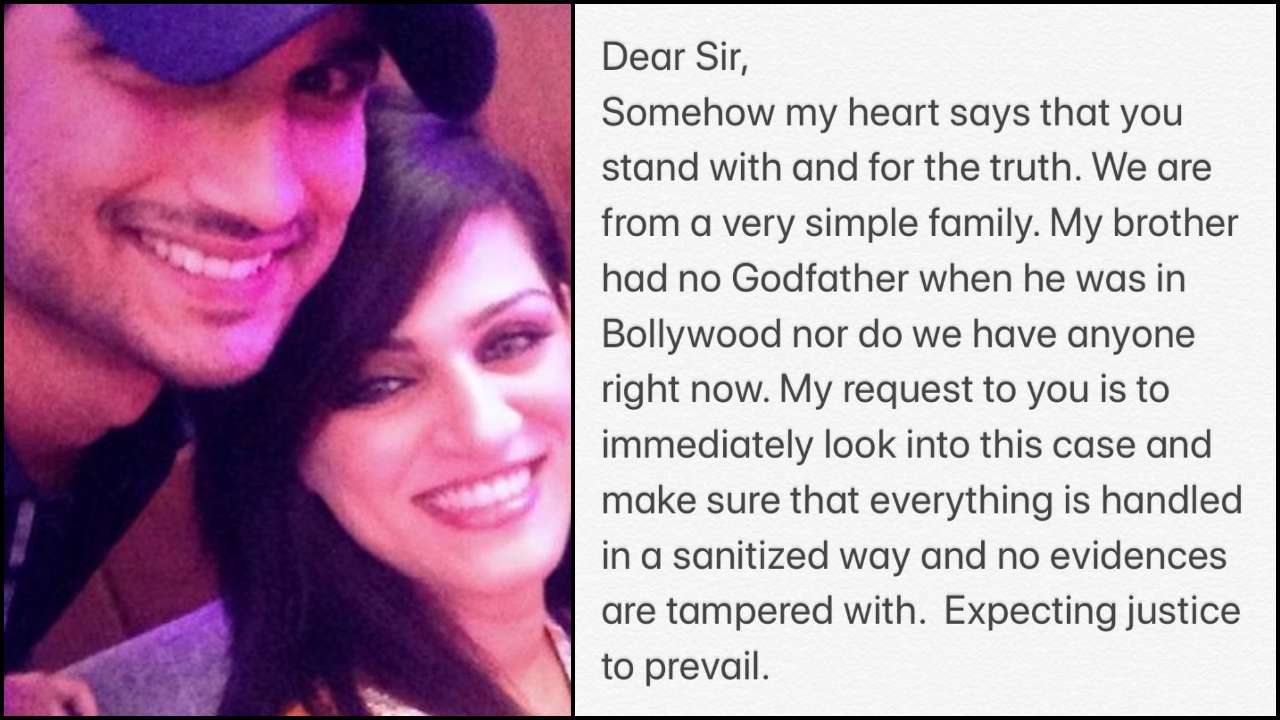 MUMBAI: Actor Sushant Singh Rajput’s sister Shweta Singh Kirti on Saturday made an appeal to Prime Minister Narendra Modi demanding justice for her brother who died last month.
Shweta posted a brief note on her social media handles, requesting the PM to look into the death case of her brother and ensure that there is no tampering with the evidences.
“We are from a very simple family. My brother had no Godfather when he was in Bollywood nor do we have anyone right now.
“My request to you is to immediately look into this case and make sure that everything is handled in a sanitised way and no evidences are tampered with. Expecting justice to prevail,” she wrote.
Sushant was found dead at his Bandra residence last month. The actor’s untimely demise was followed by a high-profile investigation by Mumbai Police during which many big names from Bollywood, including filmmakers Sanjay Leela Bhansali and Aditya Chopra, recorded their statements.
Over a month after the actor’s death, his father lodged a police complaint in Patna on Tuesday against his girlfriend Rhea Chakraborty, accusing her of abetting the suicide.
In his complaint, Krishna Kumar Singh, who had been maintaining a stoic silence over the tragic death of his 34-year-old son, sought to invoke the provisions of the Mental Health Care Act, alleging that the “machinations” of Rhea and her family members had caused his son to crack up, despite a successful career in films, and ultimately drove him to suicide.
In her post on Instagram, Shweta also said that she believes in the judicial system and expects “justice at any cost”.
Ankita Lokhande, who dated Sushant for over six years till 2016 after working with him on hit TV soap “Pavitra Rishta”, commented #satyamevajayate on Shweta’s post.
On Friday, Ankita told a news channel that she stands with Sushant’s family in these testing times and wants to know the reason behind his death.
“I‘m saying he was not depressed and if somebody is saying it’s suicide, I want to know why. If somebody is saying he was murdered, I want to know who did it?
“I am standing with Sushant’s family. I also want to know what happened. One thing I am sure is that depression, is impossible for me to believe that it happened,” she said.
Meanwhile, Rhea broke her silence on Friday evening and released a statement through her lawyers, saying that she had “immense faith” in the judiciary and believes she will get justice.
“Even though a lot of horrible things are being said about me on the electronic media, I refrain from commenting on the advice of my lawyers as the matter is sub-judice. Satyamev Jayate, the truth shall prevail,” the actor added. (AGENCIES)
^^^